Entergy, the owner of Indian Point nuclear power plant, has taken the New York Department of Environmental Conservation (DEC) to court to reverse the agency's ruling that the plant kills too many fish eggs with its current 'once through' Hudson river water cooling system. As such, the company disagrees with building a $2 billion cooling tower that DEC is attempting to force them to build to reduce fish eggs kills.

A regulatory adjudication is also pending to address these issues . One point of contention is that DEC already ruled that the facility causes an 'adverse environmental impact' via fish kills before the adjudication.

The DEC recently issued a permit to Entergy's FitzPatrick station, a nuclear plant on the southeastern Lake Ontario shore where no closed-cycle cooling has been required. AAEA participated in this proceeding. (LoHud.com)

Finally, the U.S. Supreme Court hear a case in December examining whether the Clean Water Act can force a change to the best technology available without regard to costs.
Posted by Norris McDonald at 8:47 AM No comments:

The New York Regional Interconnection (NYRI) is a plan to build a 190-mile $2.1 billion 1,200-megawatt transmission line from the Utica area through seven upstate New York counties to Orange County to the New York City area. NYRI is a U.S. corporation owned by a series of Canadian holding companies . The high-voltage, direct current (HVDC) power line is needed to improve the state's aging power grid and reduce the threat of blackouts like the one that struck the state in 2003. The state Public Service Commission is holding a serious of 13 public hearings on the project. AAEA supports the project. If approved, the project is expected to be completed in 2018. [Note: we still do not understand why direct current will be used because AC is a more efficient way to move electricity].

The cables are made of steel with aluminum cladding and will be uninsulated. The pipeline route will have 83’- 120’ high scaffold-like towers and the river route 130’-180’ high monopoles. Each main cable would carry 400,000V and 1.2 billion watts. There will be at least 2 cables on each pole or tower, plus a return. On the monopoles, there would be room for 2 more cables. 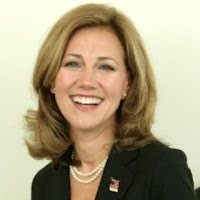 It is being reported that Silda Spitzer, right, is working at a private [we guess there is still such a thing] investment firm where she will focus on funding "green-tech" projects and alternative energy. Well we have an exciting new green tech project for you Mrs. Spitzer. It involves LEDs and a Chinese partner. We would be happy to work with you on developing this state-of-the-art project. We also intend to create green jobs that will focus on assisting ex offenders and low-income people. Give us a call. Oh. And please do not be distracted by our name. Just as the National Wildlife Federation works on energy issues, so do we. (Daily News, 10/19/09)
Posted by Norris McDonald at 6:14 AM No comments: 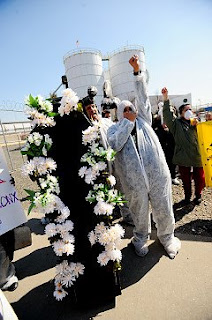 The Mothers on the Move protests against the New York Organic Fertilizer (NYOFCo) site in Hunts Point in the Bronx (pictured at left in March) led the New York State Department of Environmental Conservation (DEC) to modify the permit requirements of the firm to reduce odors coming from the facility. The question now is: how will they do that? Trash transfer stations usually use perfumes sprayed into the air and negative pressure for enclosed facilities. For asthmatics and others with breathing problems, perfumes only add to the problem. You get a sweetened odor that still irritates airways. The only way sewage treatment plants were able to reduce smells from their sites was to ship the sludge out to area farms instead of letting it dry on site.
The amended permit requirements are due to a lawsuit filed by the Natural Resources Defense Council (NRDC) on behalf of 10 plaintiffs and Mothers on the Move. NYOFCo processes about half of the city's sewage sludge into fertilizer pellets. The modified permit calls for the installation of an air pressure alarm to help keep odors from escaping the plant. It will be interesting to see how this situation will be resolved. The bottom line is that the facility probably does not need to be in Hunts Point, which is already inundated with a disproportionately large number of polluting entitites. (NY Daily News, 10/10/08--photo by Susan Watts/Daily News)
Posted by Norris McDonald at 6:29 AM 1 comment: 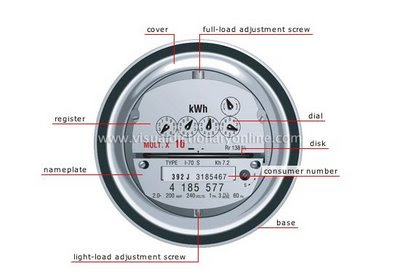 According to Con Edison, almost 10,000 residential customers, through September of this year, had their electricity turned off because they failed to pay their bills, 13 percent more than in the same period in 2007. The value of those unpaid bills is $8.9 million. During the same period, 1,600 nonresidential customers (shops, offices, factories and so on) had their power turned off, an 8 percent increase.

Con Ed sends up to five warning letters over a 90-day period before ultimately turning a customer’s electricity off. Most people who get their electricity turned off are back on within a month because they have entered a payment plan or made a payment.