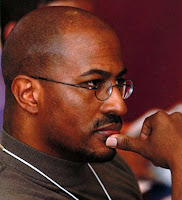 Van Jones, left, is the 2008 recipient of the $100,000 Puffin/Nation Prize for Creative Citizenship. Mr. Jones is the founder and president of Green For All, a national advocacy organization based in Oakland, California, that is committed to building an inclusive, green economy. He is also the author of The Green Collar Economy (Harper One, 2008). Mr. Jones received the annual award on December 8, 2008 at The Nation Institute Annual Dinner Gala in New York City.

Posted by Norris McDonald at 9:33 AM No comments:

The Shoreham Conundrum: The Return of Nuclear Power

It is ironic that Long Island residents killed the Shoreham nuclear power plant but now they are importing a large percentage of their electricity from the Nine Mile Point and James Fitzpatrick nuclear power plants. Maybe they do not care as long as the global warming mitigation technologies are not located in their back yard. They might figure out one day that it was one of the biggest energy mistakes in the history of New York. For if allowed to operate, it would be a major asset right now in terms of price and climate change mitigation.

The Shoreham plant was originally owned by the Long Island Lighting Company (LILCO) and from conception in 1965 to testing at low power in 1985, it was closed without ever going online for commercial use in 1989 in a deal between the company and Governor Mario M. Cuomo. Lilco later merged with Brooklyn Union Gas to form the KeySpan Corporation, which in turn was acquired by British-owned National Grid two years ago. The closing of the Shoreham plant followed years of protests that evacuation would be impossible in the event of an accident at the 800-megawatt plant. Lilco sold the plant to LIPA for a ceremonial $1 in 1992. The authority assumed the $6 billion plant debt. (The New York Times, 1/9/09)

Posted by Norris McDonald at 9:22 PM No comments: