New York To Get $517.8 Million for Weatherization

New York will receive about $517.8 million for weatherization and energy efficiency grants as part of the American Reinvestment and Recovery Act. The Weatherization and Energy Efficiency Grant Program provides federal grants to states, counties, local governments and tribes to lessen energy use and fossil fuel emissions. New York will get about $394.7 million for the Weatherization Assistance Program and about $123.1 million for the State Energy Program, according to the U.S. Department of Energy. (PoughkeepsieJournal.com) Hat Tip: NYAREA

Posted by Norris McDonald at 1:59 PM No comments: 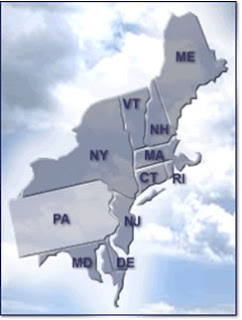 AAEA supports the free allocation of carbon dioxide (CO2) allowances in the upcoming national legislation to address global warming. President Obama should take Governor David A. Paterson's example and eliminate the auction of allowances in his proposal for a national global warming program. Auctioning the initial allowance unnecessarily raises the cost of a carbon reduction program. The utilities should be allowed to decide how they are going to invest any climate change mitigation program.

Governor Paterson intends to direct the State Departmentof Environmental Conservation to alter regulations in which utilities buy or trade allowances to cover carbon dioxide emissions. This alteration of the New York reg has implications for the other nine Regional Greenhouse Gas Initiative (RGGI), who might also back off of auctioning allowances in order to keep electricity rates at reasonable levels. This situation also shows the need for national legislation.

RGGI, which New York signed onto four years ago, established a system whereby power producers were required to obtain what are called allowances, which permit them to release certain levels of carbon dioxide emissions. They typically obtain the allowances by buying them at auction or trading them. The requirement for utilities to obtain the allowances in this way was established not only as a financial disincentive to discourage them from polluting, but as a way for states to raise money for greener energy initiatives.

Governor Paterson plans to increase the number of free allowances provided by the state, which would lower the industry’s costs of compliance. The industry says the system hurts those power producers that signed long-term contracts with utilities years ago, without being able to factor in the price of the allowances. The additional allowances would be distributed to those that signed long-term contracts. “

Industry executives asked that the free allowances, which currently allow for the release of 1.5 million tons of emissions, be increased to 6.5 million tons, which, according to the most recent auction price, could save them $16.9 million. (NYT, 3/5/09)

Posted by Norris McDonald at 1:14 PM No comments: