DEC To Modify Permits for Danskammer 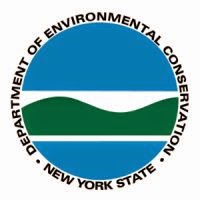 The Department of Environmental Conservation (DEC) has tentatively determined to renew and modify several permits for the Danskammer power plant, which a new owner plans to reopen.  They include air, acid rain and pollution-discharge-elimination permits. The DEC says applications for those permits and one to withdraw water from the Hudson River are complete.


Among the modifications is one requested by the facility owner, to remove the coal firing process. Danskammer’s four units burn natural gas, and two can also burn oil.
The water withdrawal permit would allow the facility to continue taking up to 455 million gallons per day.
Comments on the application and draft permits must be submitted in writing to Christopher M. Hogan, NYSDEC Division of Environmental Permits, 825 Broadway, Albany, NY 12233, or by email to DEPPermitting@dec.ny.gov, by Sept. 19. (Record Online 8/21/2014)
Posted by Norris McDonald at 1:56 PM No comments: